We Fell In Love In the Grand Haven Area 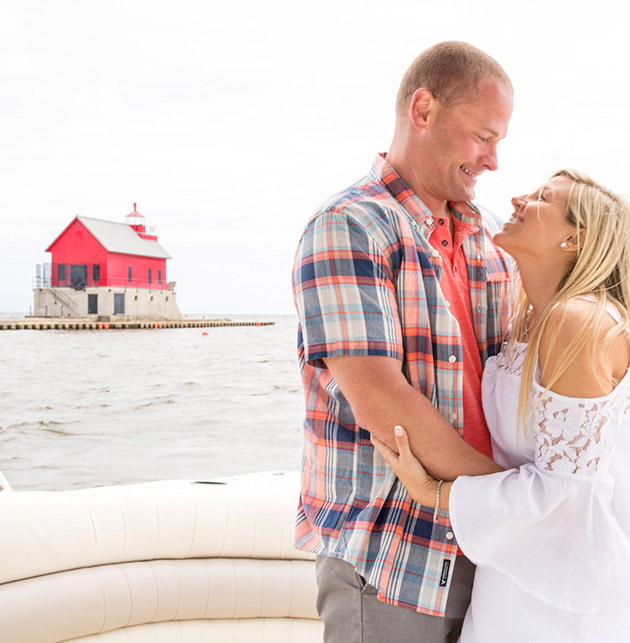 It’s Valentine’s Day and love is in the air! Last week, we asked our social media followers to share their Grand Haven area love stories with us. We received so many great stories and photos – here are some of our favorites. 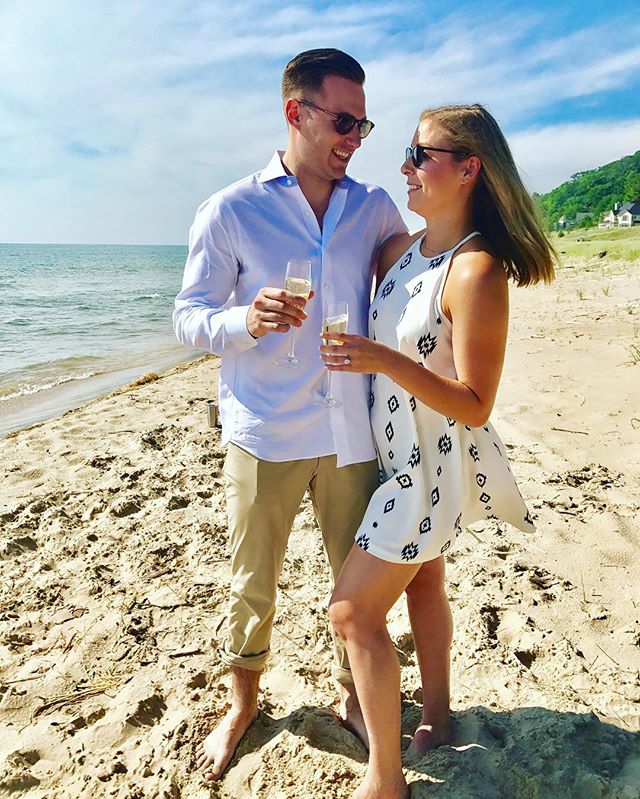 “My husband and I got engaged in Grand Haven last June and just got married two weeks ago! This photo was taken on the beach at his Dad’s house between Brucker Beach and Rosy Mound. Grand Haven is where we first fell in love so that’s why he proposed there.” Kinzer & Julia – Chicago, IL 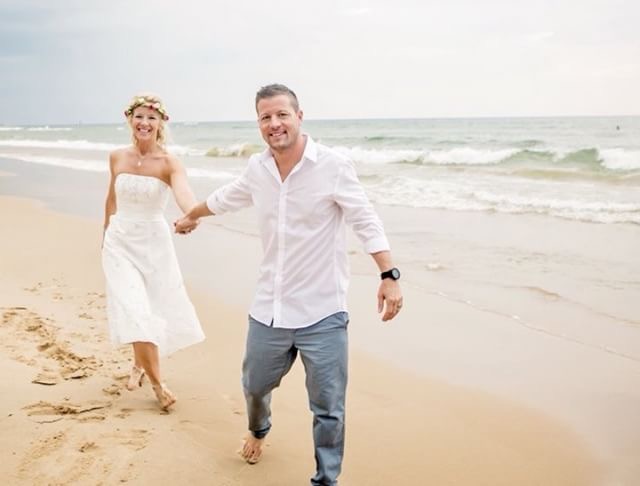 “We fell in love on the quieter, lesser known side of Grand Haven. The North Pier and close by park became for us a sacred and holy land. Two years ago we met, fell in love and walked the shoreline. We talked about our two stories and the unwritten chapters being woven together in an epic romance novel. Last year we were married there, on the beach with the setting sun and crashing waves. And yes, rain mixed with tears of joy.” Jay and Teresa – Grand Rapids, MI 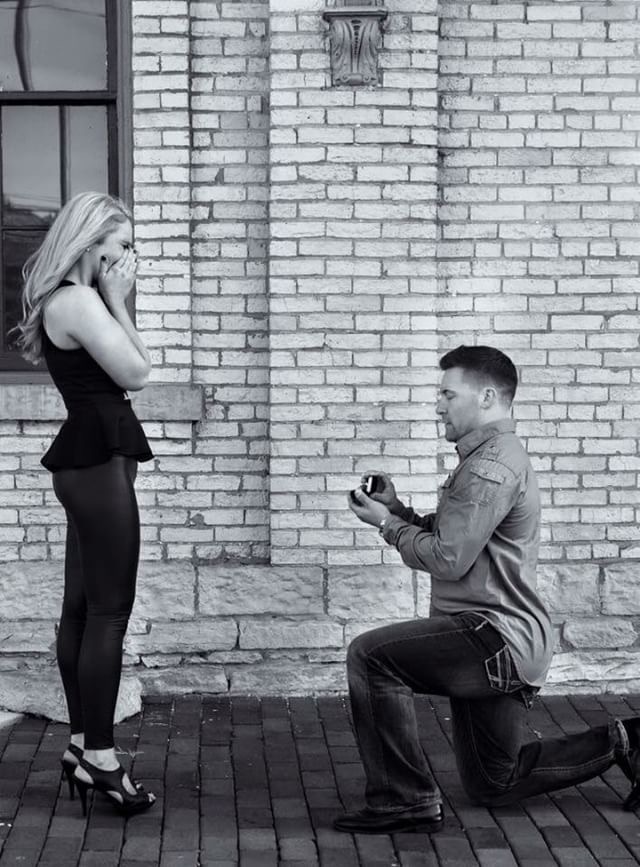 “My husband and I got engaged downtown in the fall of 2015! He surprised me during a photo shoot! We live in Grand and it’s the place we love to spend all our free time as well.” Chanda and Dan – Grand Haven, MI 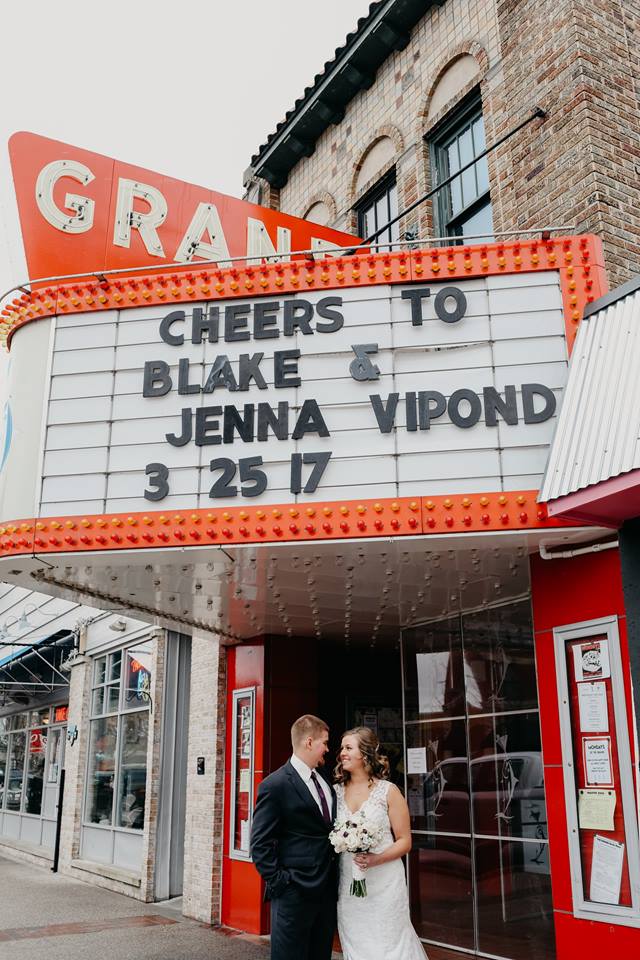 “We were in the same grade at Spring Lake High School and our friend groups started hanging out together the summer before senior year. During a group camping trip up north, he asked me to be his girlfriend and we’ve been together ever since. After being together for almost a decade, we got married in downtown Grand Haven in March of 2017.” Blake & Jenna – Holland, MI 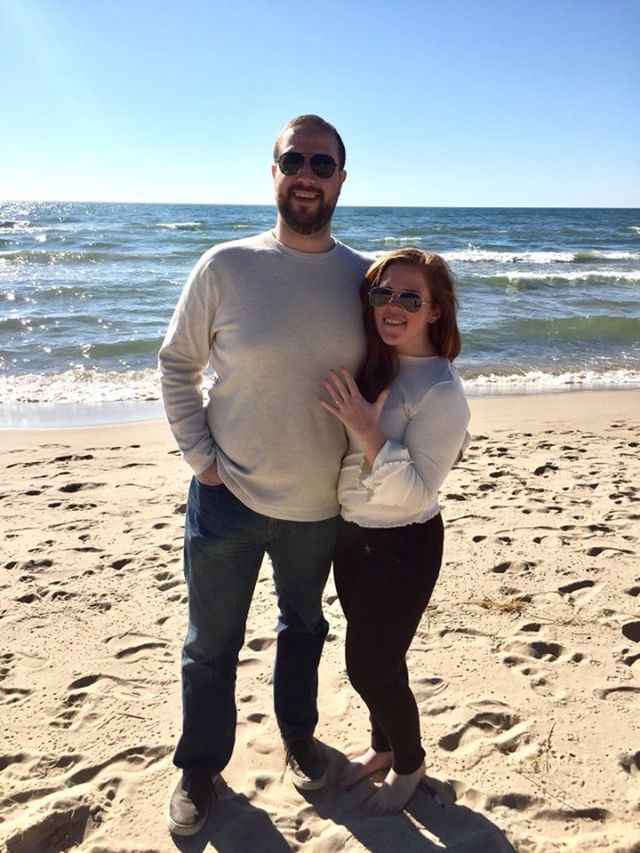 “Three generations of my family have been coming up to our cottage in Grand Haven for the past 95 years! The first time I brought my fiancé up with me, he immediately fell in love with the town, the beach, and most importantly, Dairy Treat ice cream. We got engaged on our usual morning walk on the beach on an unusually warm October morning. We both loved that we got to celebrate that day with my family and all of our friends in Grand Haven as well! We cant wait for the next 95 years!”
Bryan & Elizabeth – Chicago, IL 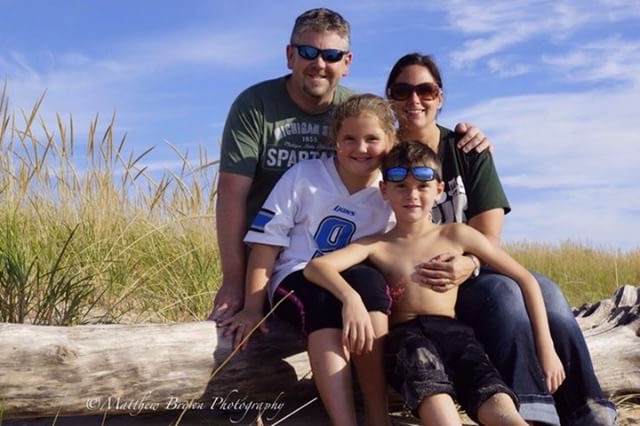 “This family wouldn’t exist if it wasn’t for the city of Grand Haven.  I met my wife on the boardwalk in the summer of 2000 and it changed my life in so many ways. Our first date was Mini Golf at Chinook Pier and ice cream while watching the sunset. I would’ve proposed to her on the beach but a jeweler ruined my plans after leaving a message on my answering machine. ? This city has so many memories for my wife and me. We had our wedding rehearsal at Central Park in 2002 and our rehearsal dinner at Porto Bello.  While we don’t live in Grand Haven, we’ve never lived more than 10 or 15 miles from there because our whole family loves the town so much. You may even find us in the dead of winter watching the sun go down and taking pictures of the ice. Probably one of the reasons why we could never move away. We love Grand Haven.” Matthew – Allendale, MI 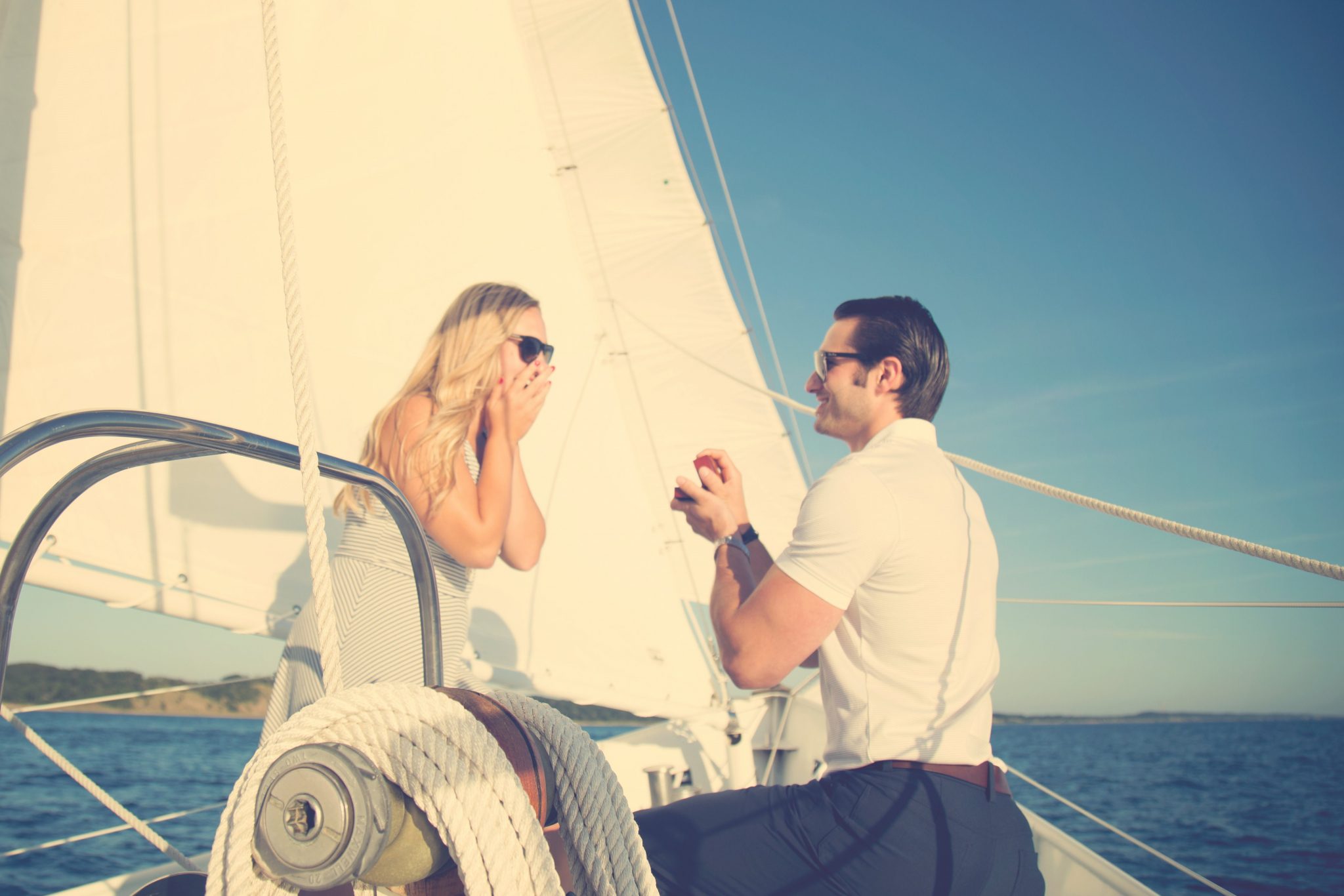 “We met in the hallways of Spring Lake High School in 2006. We were friends throughout high school but it was not until Grace’s senior year at the University of Michigan when I asked her out on a proper date. In January 2016, I started to plan a surprise proposal. I wanted to do something special and memorable so I decided to invite all of our friends aboard the Wind Dancer, a tall ship sail boat for a sunset cruise along the shores of Lake Michigan in Grand Haven. Grace was completely unaware and did not put two and two together. On the bow of the boat, Grace said yes to my proposal. I will admit I was shaking like a wet chihuahua as I hugged Grace and put the ring on her finger. We’ve been happily married for 5 months now and are enjoying our first home together in Spring Lake.” Justin & Grace – Spring Lake, MI 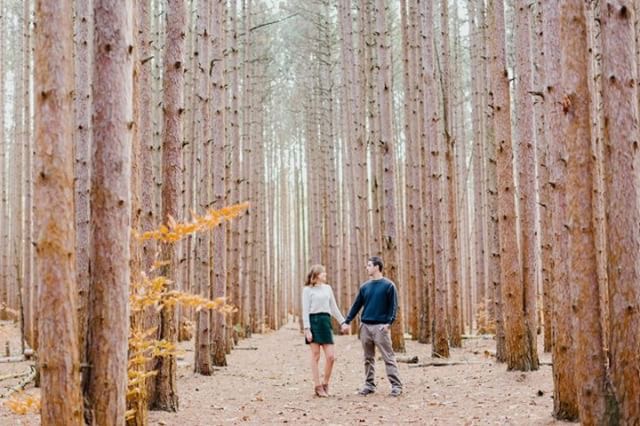 “Being from Grand Rapids, we have always loved date nights in Grand Haven going to dinner and walking along the beach. On Memorial Day, we went out to Grand Haven to walk around and grab dinner and as we were walking on the beach, my fiancé got down on one knee and proposed! When thinking of where to do our engagement pictures, Grand Haven was an obvious choice!” Michael & Makenzie – Lexington, MI 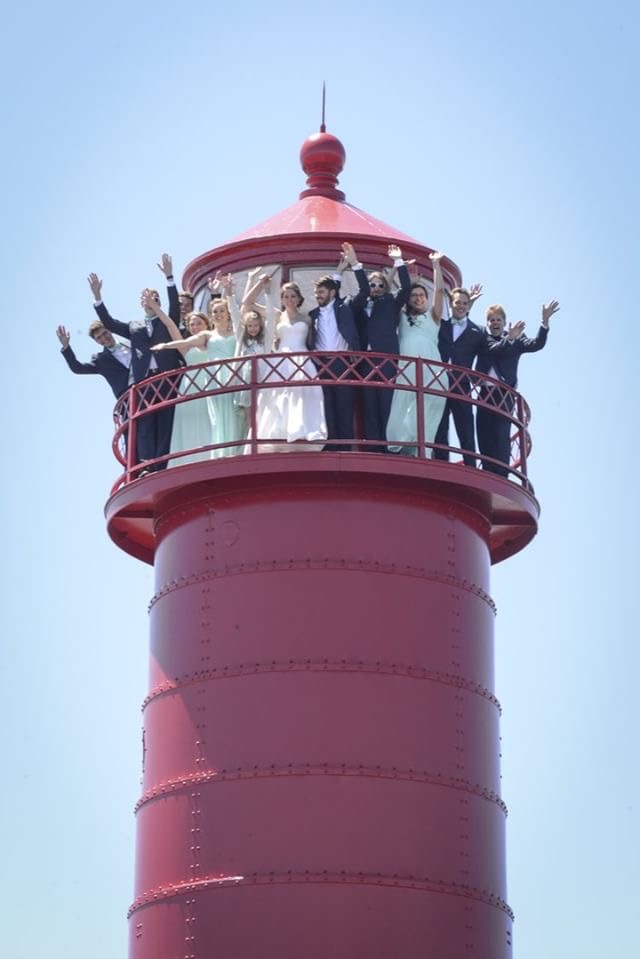 “We got married on the beach in July of 2016 in the afternoon after taking a picture on top of the lighthouse. #savethecatwalk” Martin and Abby – Holland, MI 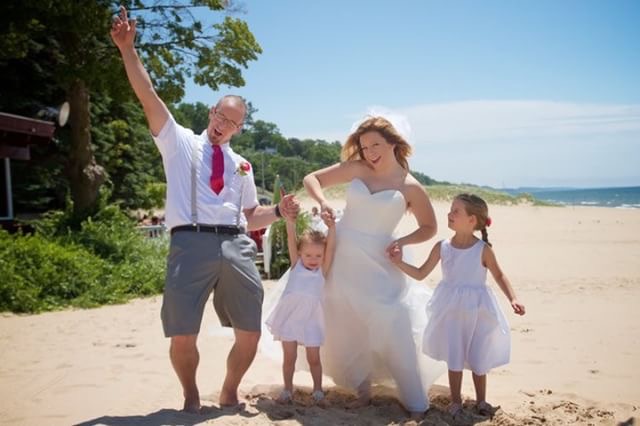 “My husband proposed to me in Grand Haven at sunset. A year later we got married on the beach in Grand Haven followed by our reception at Bil-Mar ❤️ Grand Haven is the start of our happily ever after! Andrew & Amanda – Dundee, MI 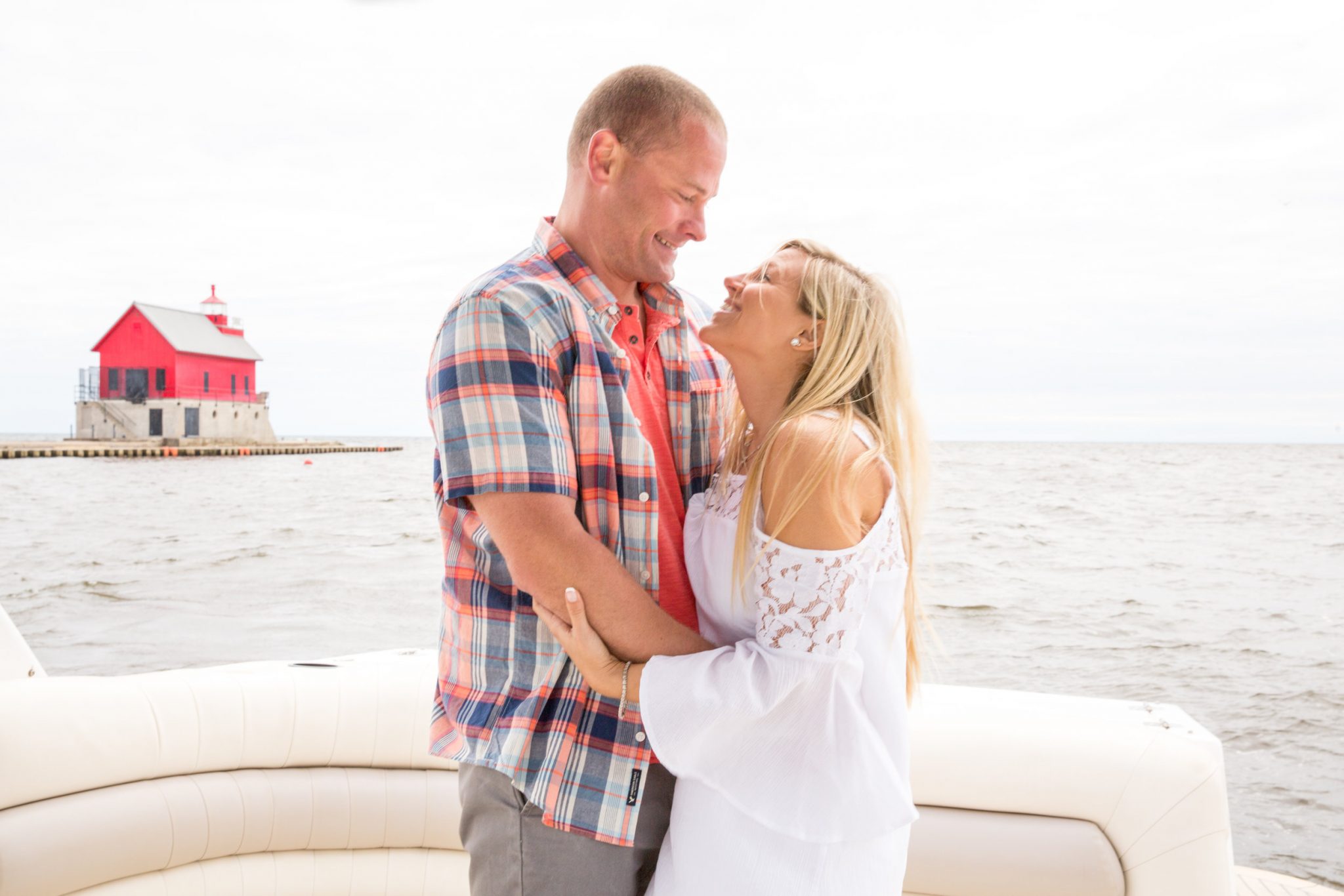 “We met through our careers.  Jeff was living in Lansing, and I lived in West Lafayette, IN.  We began dating and most of our first two years of dating were long distance. We would meet in Grand Haven for a weekend of boating aboard our boat during the summer.  The first time Jeff said “I love you” was while watching the Musical Fountain – which was very cute! This past summer we got married on 7-21-17 which happened to be Jeff’s parents 44th wedding anniversary, and my parents 33rd, which made it even more special.  The wedding was downtown Grand Haven right outside of the sailing club.  Both bridal parties arrived on separate boats to the same dock in the Municipal Marina. Our reception was at the Harbourfront Grand Hall which is above Porto Bello.  We love Grand Haven and plan to make many more special memories there!” Jeff & Raeann – East Lansing, MI