Guiding ships and attracting visitors for over a century

Established in 1839, two lights on the south pier, both painted red, are connected by a lighted catwalk that also connects them to the shore and the Grand Haven Boardwalk. The inner light is cylindrical, and the foghouse outer light stands on a huge concrete foundation. People often enjoy a stroll along the boardwalk that borders the Grand River channel and the pier, making the Grand Haven lighthouses one of the most photographed lighthouses in the Midwest. The Grand Haven pier is also a popular spot for fishing and catching the sunset.

***You can access the boardwalk and view the lighthouses from the beach at Grand Haven State Park. Another way to see the lighthouses, is from the north pier which is accessible via North Shore Drive in Ferrysburg. There is a public parking lot located on the north side of the river channel.

Here is the original timeline on the pier project and Save The Catwalk campaign from 2017:

November 9, 2017 – Save the Catwalk campaign surges toward completion

February 9, 2017 – Work to begin soon on next step of rehab project

While the lighthouses are not currently open for tours, you can learn more about the lights and the Grand Haven Lighthouse Conservancy’s efforts to preserve and restore them here.

Want an inside look at the Grand Haven lighthouse? Check out our video!

End of August 2019 – The restoration of the catwalk is complete.

Find the latest updates on the catwalk here. 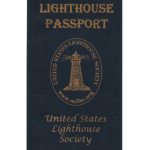 Lighthouse ‘hunting’ is an addicting hobby, one shared by hundreds of thousands of people around the globe. The Lighthouse Passport Program provides enthusiasts the opportunity to help preserve lighthouse as well as a wonderful way to keep a pictorial history of their lighthouse adventures.  Small donations made by Passport holders generates thousands of dollars for lighthouse restoration and preservation projects.  By joining the free Passport Club you become part of a large group of individuals and families seeking unique Lighthouse Passport Stamps as a fun and educational activity.