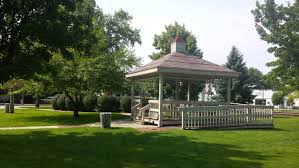 In addition to being a businessman, William Hatton was a philanthropist and a civic leader, who was involved in the Grand Haven Rotary and in the creation of the City’s first hospital.

During the heydays of railway passenger service, William Hatton Park was an active site for picnics as well as gathering points for those getting on or departing from the train. However, as the rail traffic gradually decreased, so did use of the park. The very last passenger train on the line that runs through Grand Haven pulled out in 1971, and afterwards, the park fell into disrepair largely due to lack of use.

In 1989, Herb and Fran Hierholzer went house to house to secure signatures for the purpose of improving the park. Olive Hatton Harbeck (William Hatton’s daughter, then 88) personally gave $10,000 toward restoration of the park that was named for her father.

The restored William Hatton Park was re-dedicated in August of 1992. The focal point of the restored park is a gazebo built by Oosting Construction Co.