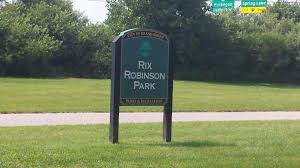 Rix Robinson Park, located on the Grand River at the southeast end of the US-31 bridge right
next to the Grand Isle Marina, is named after Grand Haven’s original pioneer. It was built in
1967-68 by the Grand Haven Jaycees around a natural pond, and features a bridge and
picnic tables.

Rix Robinson named Grand Haven in 1835. Though he drew up the original plat, Robinson
purposely did not name any streets after himself, as did many of the early pioneers such as
Ferry, Pennoyer, DeSpelder, and Griffin. For 130 years Robinson never had a street, school,
public building, park, or anything else named after him to honor his legacy. It was for this
reason that the park was named after Robinson, and Mayor Quebbeman made Robinson’s
contributions to the Grand Haven area clear in his dedications at the opening of the park.

In 2001, the Grand Haven/Spring Lake bike and hiking path opened, which runs through Rix
Robinson Park, again rejuvenating the park and giving it new purpose.