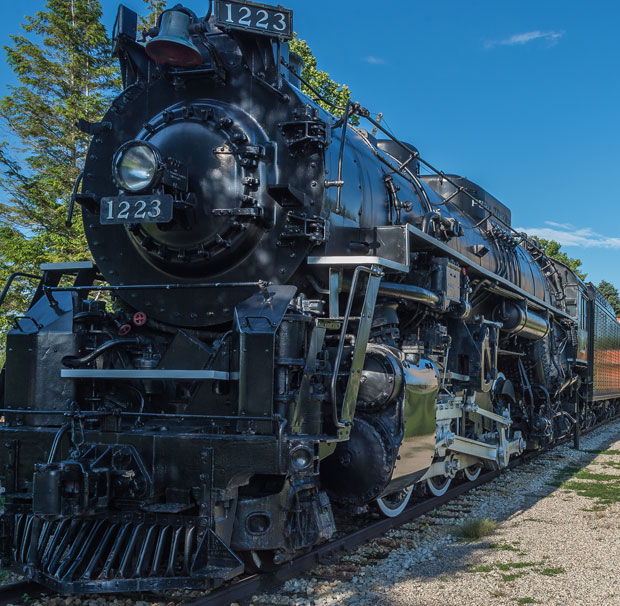 The Pere Marquette  # 1223 is a steam locomotive on permanent display in Grand Haven, Michigan. She is only one of two surviving engines  Pere Marquette 2-8-4 (Berkshire) engines.  Number 1223’s history, while not as well known as sister #1225’s, is interesting nonetheless. Constructed in November, 1941, she served the PM moving heavy wartime traffic, and with her sisters pulled the PM’s premiere expedited freights, numbers 40 and 41, The Overnighter, on their tight nine-and-a-half hour schedule between Chicago and Detroit, via Grand Rapids. This service was not only competitive against trucks connecting Chicago and Detroit, but given the state of the highway system prior to 1950, was unbeatable!

Of the 39 members of the Pere Marquette’s fleet of Superpower Berkshires, only two examples remain– #1225, restored to operating condition by the Michigan State Trust for Railway Preservation, Inc., and #1223, cosmetically restored and displayed at the Tri-Cities Historical Society museum site in Grand Haven, MI. In fact, of the entire fleet of steam locomotives operated by the Pere Marquette, only these two engines escaped the scrapper’s torch. A third Berkshire, #1227, was offered to the City of Grand Rapids for display at John Ball Park, but the city’s Parks and Recreation Department declined the offer, and she was sent to the scrapper.

Upon arrival in Grand Haven in 1981, #1223 was moved to the site of the former Grand Trunk Western yard along the Grand River, at the intersection of North Harbor Drive and First Street. Over the succeeding years, she was joined by ex-Pere Marquette steel caboose #A986 and ex-GTW caboose #77915. In 1982, the West Michigan Railroad Historical Society acquired PM steel boxcar #72222, cosmetically restored it, and donated it to the restoration effort for use as both part of the display, and as enclosed storage space.