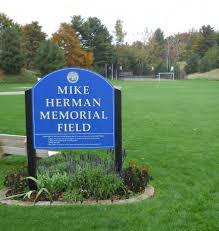 The Mike Herman Memorial Field Committee consists of many volunteers who have raised funds and made several improvements to this memorial park. The people directly involved in raising funds are Annel Olthof, Beth LeBeff, Chris Wright, Connie Berry, and Bob Wright. We have raised about $40,000 for this great project. We have resurfaced the tennis court, installed 4 basketball poles, painted the tennis court fence, installed lights around the tennis/basketball courts, put up a new baseball backstop, built a shed to house the ice rink when not in use, installed an irrigation system, had new stone dust brought in for the baseball field, added new top soil to the rest of the field and had it hydro-seeded. Most of the work has been done by volunteers.

About Mike Herman
Mike Herman, a 15 year-old young man, played soccer on that very field. On November 16, 2005, he was killed in a car accident. The committee’s goal is to provide a great place for kids and families to enjoy several different sports in memory of Mike Herman.

If you would like to donate to the support the maintenance of the Mike Herman Memorial Field, send your donation, along with Invalid download ID. payable to the “City of Ferrysburg” to PO Box 38, Ferrysburg MI 49409