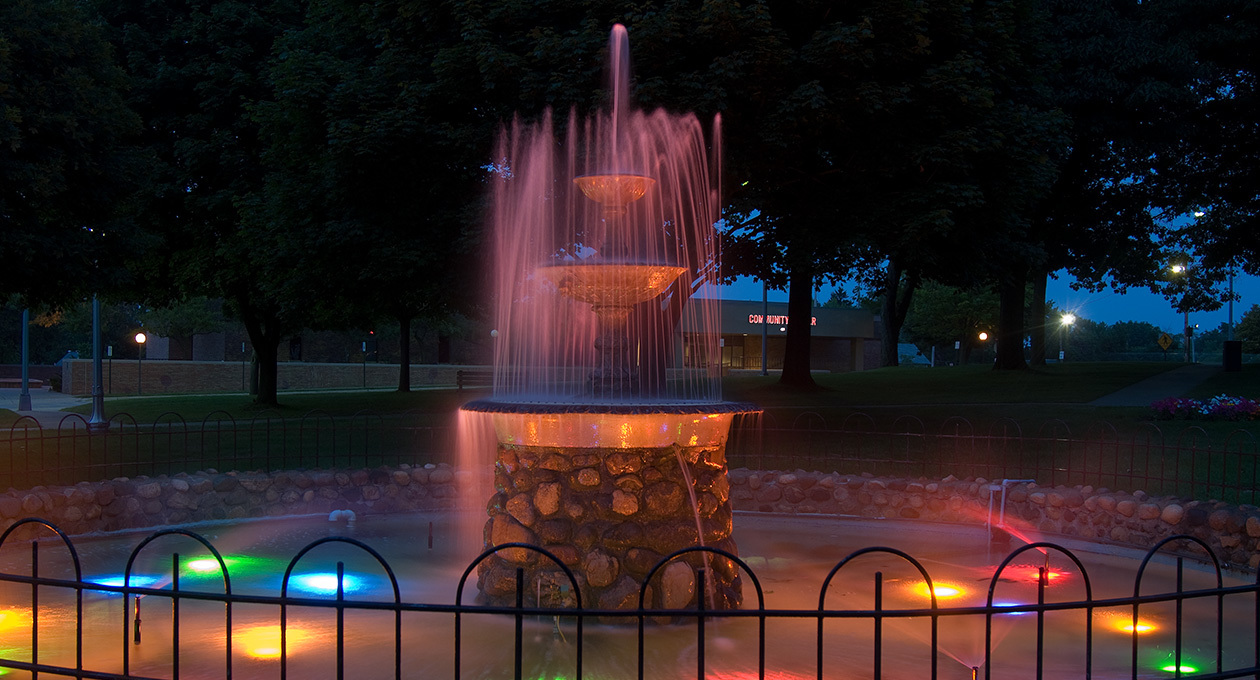 Central Park is located on Washington Avenue in the center of the City providing a traditional downtown public green. Significant features include a central fountain and two memorials. As the central green, it is a focus for numerous events, including weekly summer music concerts, art fair and holiday events. Daily the park is enjoyed as a cool shady space to walk through and sit. The park is located adjacent to the Louit District Library, Grand Haven Community Center, Ottawa County
Courthouse, and U.S. Post Office. The park and fountain is also a popular location for weddings. Many weddings and social gatherings are held in the park during the summer months.

Central Park is a two and a half acre green space right in the heart of downtown Grand Haven. It offers a welcome place to rest, enjoy the shade, or to admire the water fountain, and also hosts a variety of events throughout the year including the Coast Guard Craft Show and Tuesdays In the Park music series.

The current Central Park was originally the City Cemetery, and was on the eastern boundary of the original village of Grand Haven. As the town grew around the cemetery, it soon changed from being on the edge of town to the center of town, and throughout the 1800s citizens’ desire to move the cemetery to a new location increased.

In 1867 the “Washington Street Cemetery” was deeded to the City for $1 as park land, with the understanding that the graves would eventually be moved to the new Ferry Hill location, what is known today as Lake Forest Cemetery.

In 1900 the park was sown with grass seed purchased from the City’s general fund, and saplings-what would become the mature trees seen today-were planted on Arbor Day in 1901. By 1906, the sidewalks that radiate out from the central fountain were in place. Also, in 1908, the original small fountain was replaced by the grand fountain that had originally been in the courtyard of “W.C. Sheldon’s Magnetic Mineral Springs”, which was located where the current 5/3 Bank is today. This is the current fountain we still enjoy, which was just recently restored in 2010.

Source: In the Path of Destiny by David Seibold