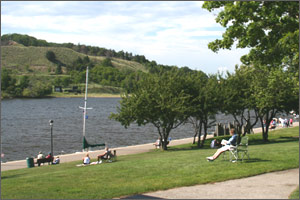 Bicentennial Park runs along the Grand River from Franklin down to Clinton Street. The park was dedicated in the summer of 1976, during which a time capsule was buried in the park to be recovered at a later date.

Historically, Grand Haven depended greatly upon water transportation, which resulted in nearly all businesses developing along or near the river. With the coming of the railroad in 1858, Grand Haven became even more of a shipping hub for cross-lake commerce for all of West Michigan.

However, after World War II the entire river front fell more and more into disrepair, and by the 1950s it had become an embarrassment. Some popular waterfront entertainment began around this time, such as the Whitey White Water Thrill Show in 1957, and the Musical Fountain which debuted in 1963. With these new attractions and the spectators they were drawing to the waterfront, it became clear that the riverfront needed to be cleaned up.

The Loutit Foundation, having already invested heavily in the Musical Fountain, began to purchase riverfront land as it became available during the 60s, holding it for future
improvement. By 1976 the Loutit Foundation had acquired all of the river front property from Columbus to Howard Street, which was then improved and given to the City, becoming the core of Bicentennial Park.

Source: In the Path of Destiny by David Seibold