Visit the Coast Guard Festival website for the full schedule and details!
www.coastguardfest.org

Find more information on how you can support Grand Haven Coast Guard Festival. 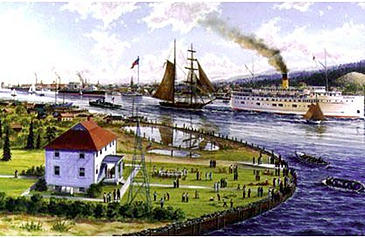 Grand Haven. Today the Grand Haven Coast Guard Festival has become a premier event with attendance of over 350,000 people including the nations highest ranking Coast Guard dignitaries from Washington, D.C.

Did you know? Grand Haven was the first city to be designated by an act of Congress to be Coast Guard City, USA?  Our proud community received this honor on November 13, 1998 due to our long history and ongoing efforts to acknowledge the contributions and services provided by the men and women of the Coast Guard.

This year marks the 225th birthday of the Coast Guard and Grand Haven plans to celebrate in a big way!

Parades, memorials, picnics, carnival rides, fireworks, car show, craft fair and the list goes on. The Grand Haven Coast Guard Festival is an annual celebration of all things Coast Guard. The downtown stretch of Washington Street is home to the carnival while the waterfront is dotted with lots of tasty food treats – if you have an annual carny food splurge this is the place to do it!

The boardwalk will be a bustle with foot traffic leading attendees to and from the lighthouse, beach, ship tours and downtown. The waterfront stadium, also along the boardwalk, is host to a variety of musical entertainment acts as well as a fun water ski show. The community welcomes a wonderful mix of Coasties, residents, visitors and local/state dignitaries. If people watching were a sport this would be the Olympics! Come with family and friends or make new ones. Many new friendships have been forged via Coast Guard Festival – trust us, it’s quite the bonding experience.

Stop n’ shop the CGX – Coast Guard Exchange store, this a great place to visit to get your Coast Guard gear and memorabilia. The CGX stocks up in unique items just in time for Coast Guard Festival at their location at 650 South Harbor Drive, Grand Haven – adjacent to USCG Sector Field Office.